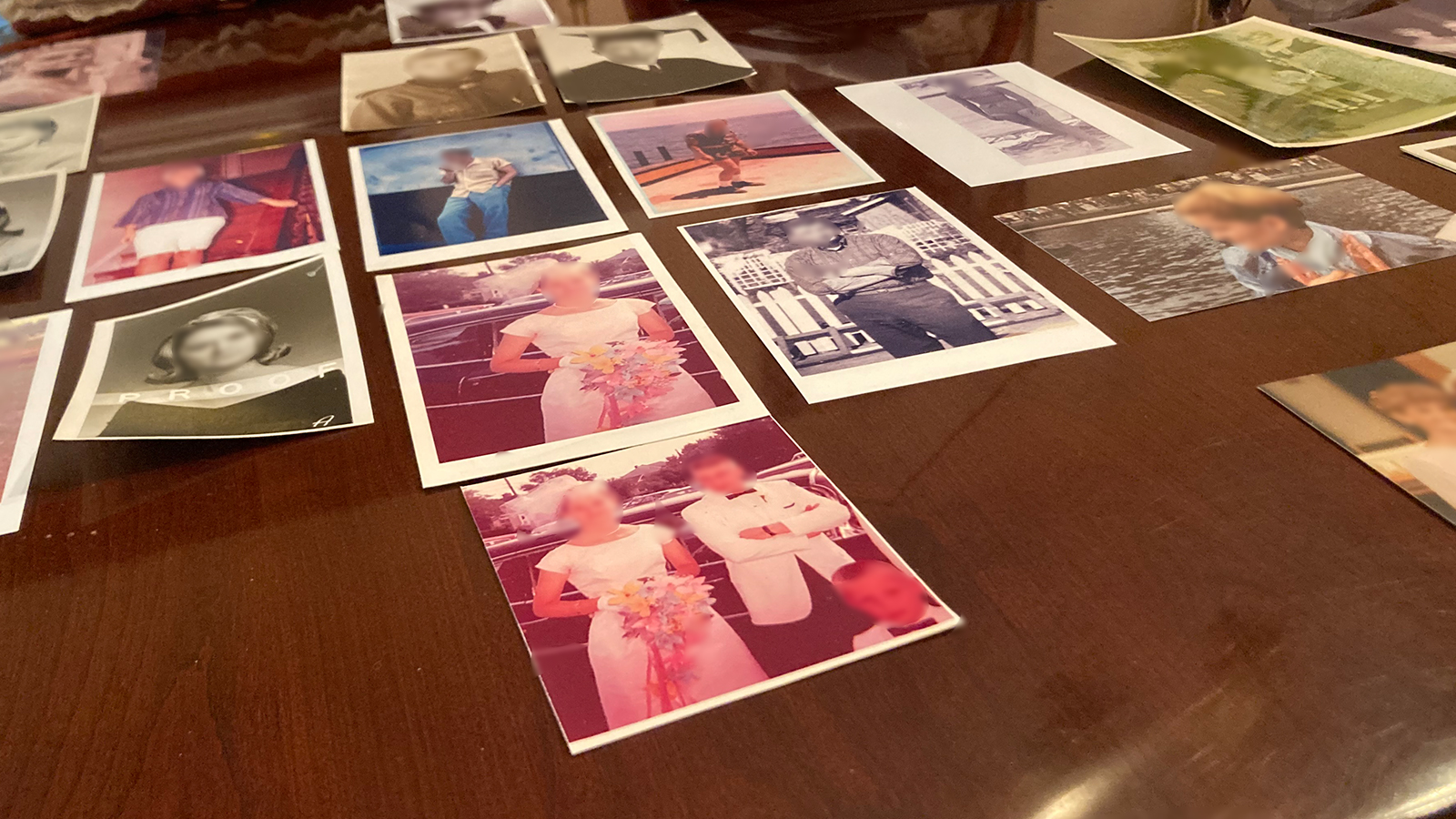 Today is World Alzheimer’s Day – a day to raise awareness of the disease process that impacts so many seniors and their families across the globe. When in the throes of the disease, it can be difficult for loved ones to focus on much more than the loss they’re experiencing as they watch the person they love become unable to know where and who they are.

It’s true that as we age, a lot of us may experience certain conditions that impact what our day-to-day lives look like. Last month, we recognized National Senior Citizens Day. September is World Alzheimer’s Month. In October, we have World Osteoporosis Day. This seems to be a season of acknowledging older adults and the conditions that may impact them. But, these aren’t the things that define us. It’s our lives, our relationships, and the events that led us to where we are in our journey that define who we are, not our age or conditions. This month, A Place At Home is starting a new blog series – “The Rings That Shape our Lives: Stories from Those on the Aging Journey.” This series aims to reveal the identities of aging adults beyond their current care needs.

Like our logo, the Tree of Life, we all have roots that we came from, and the seasons of our lives have formed rings that tell the story of “us” – who we were, who we’ve grown into over the years, and who we are now.

Enter Lena and Edwin Michales, the first in our series. The Michales have been married for almost 57 years. She was a teacher; he was enlisted in the United States Air Force. They lived all over the world with their two children and spent time visiting the coasts when they were living stateside, and planned to continue traveling once they retired. But, unfortunately, they had no way to predict the way their lives would look at the beginning of their Golden Years. Cancer, MS, and finally, dementia would create some of the most profound rings of their lives.

This is the first part of their story.

Lena and Edwin met in a coastal town on the East Coast. He was in the military, and she had just graduated from college with a degree in Education. The first time they met was at a social gathering, introduced by a good friend of Lena’s. The next time the two would lay eyes on each other would be almost a year later, both participants in the same friend’s wedding party. Lena’s mother warned her to be careful with Edwin, telling her, “that man is looking for a wife, and he thinks he’s found one in you.”

As it turns out, Lena’s mother wasn’t wrong.

Edwin and Lena dated following their friend’s wedding, and though Lena’s parents weren’t supportive of the match, the couple knew that they wanted to start a life together. They approached the church, who told them that they couldn’t wed without their parents’ blessing. That didn’t stop them. The couple eloped and were married on December 26th. A week later, since they had been legally married already, they had a ceremony in the church. When asked which day they chose as “the” day to celebrate their anniversary, Lena says it was different each year. “If we were tired or broke on the 26th, we would celebrate it on the date a week later. We were often tired and broke on the 26th.”

Edwin and Lena were like most young military couples at the time. They had two young kids and a tight budget with which to afford life. When they were living stateside, Lena shares that they never went on extravagant vacations; they would rent a car, and travel to the East Coast, first to New Jersey to visit with her family, and then up the coast to Maine. Though they ended up retiring land-locked in the Midwest, the ocean has always been a theme of their lives.

“Almost every picture we took together over the years, there’s water in the background.”

There were years of their lives that they spent living overseas, living wherever Edwin’s military career dictated. Their favorite assignment was when they were stationed in Aviano, a town at the foothills of the Italian Alps, in Northern Italy. There was no base housing for this assignment. Everyone lived in the village or in farmhouses. They had no television and no phone. “I’d open my shutters in the morning to see the Alps – the Dolomites – to see what the weather was for the day.”

While Edwin’s time in the Air Force dictated where they lived, Lena found that, at times, it also dictated her career.

Growing up, she had a natural affinity for math and science. She was a voracious reader, as well. She read every single book in the children’s section of her hometown library. Once she’d read everything in that section, she got a note from her father that allowed her to read the rest of them. It’s no wonder she ended up going to college to be a teacher, a profession she loved and worked in until she was 60.

While they were living overseas, however, there were times when she wasn’t allowed to work due to restrictions put in place by the Department of Defense. They didn’t allow dependent wives from the US to work. But Lena was tenacious. She says while they were living in Italy, she would walk down to the piazza each morning where Civilian Personnel was located, telling them she wanted a job. Sometimes she went twice a day, every time being told “no.” Eventually, though, her determination paid off.

“They got tired of seeing me, and I finally got a job. I taught full-time, living in Italy.”

Educating children is something that Lena was passionate about when she was younger, and it’s a passion that remained with her throughout her life. She retired from the profession at the age of 60, but not by her preference. In 2002, she was diagnosed with cancer. It was in both of her legs. Though doctors did what they could, in the end, Lena lost both of her legs. Over six years, Lena underwent thirteen surgeries, each one leaving her bed-ridden for eight weeks at a time. Looking back, she says retiring was the right thing to do. She didn’t feel that she could do the job like she thought it needed to be done. Though she admits, it broke her heart to stop teaching.

“I still loved what I did, I still felt good, and I was fit. I had planned on working until I was 70. It didn’t work out that way.”

The tenacity that drove Lena through most of her life didn’t fail her when she lost her legs. At first, she was very dependent on Edwin, something that was a first for both of them. She was non-weight bearing and used a wheelchair. She was in and out of rehab facilities. Edwin was not only assisting Lena heavily, but he was also tackling things like grocery shopping for the first time in their lives together. TV dinners and Prego. “He took good care of me, but it wasn’t easy for him.” It wasn’t easy for Lena, either. She had always been an independent person, not afraid to carve out her path. Over their years together, if she wanted to travel somewhere and Edwin didn’t, Lena would go by herself. He loved her independent spirit.

Even after losing her legs, that spirit stayed with her.

Each day she would pack a lunch, and a van would come to pick her up from her home and take her to a rehab facility. There, she paid privately for the use of their gym and equipment to keep herself strong. After her workout, the van would pick her back up and drop her off at a local elementary school. There, she would spend the afternoon working with first graders. Lena volunteered at this particular school because it was wheelchair accessible, something she needed since she no longer had legs. Eventually, she was fitted with prosthetics, which allowed her to live far more unrestrained than she had been.

Lena remembers the relief she felt when her prosthetist told her she could drive with her new legs. “I became very independent again as soon as I found that out.”

Cleared to drive, she joined a book club in the city closest to her little town. She continued her volunteer work. She started a youth group that grew to be so popular, she had to start a waitlist for the kids that wanted to join. Lena had 33 fourth, fifth, and sixth graders at a time, giving back to their community. They would volunteer their time in homeless shelters, humane societies, hospitals, and more. Lena wanted to meet different people and didn’t want her life to be limited.

While Lena was rediscovering her independence in this new phase of her life, Edwin struggled with it. While her independence was something he had always loved and admired, this time, he seemed suspicious of where she was and upset that she wasn’t at home with him. At the time, she’d chalked it up to the idiosyncrasies of aging. He’d retired himself at the age of 60, diagnosed with MS. Though MS is a progressive disease, Edwin got along fine, for the most part, using just a cane for support. The worst of it was the fatigue it caused him, but even so, he had been able to care for Lena almost exclusively for the six years she battled cancer and through the loss of her legs. This new anxiety about where she was, was not like him.

“Now I look back at it, and it was telling that something wasn’t right. But I had no idea at the time.”

For the next few years, Edwin’s behavior and overall countenance would change so drastically that there was no way to brush it off as idiosyncrasies of aging. Lena would take on the role of Edwin’s caregiver, as he had cared for her when she lost her legs. Together, they would experience the confusion, sadness, and cruelty that dementia inflicts on families. Lena would learn how to interact with her husband in a way that she’d previously used when teaching small children. She would also come to know the significance of being an advocate, especially when Edwin’s disease progressed and he could no longer advocate for himself.

Life is made up of our stories. Our rings are what shape us. For the couple in this week’s series, they spent their lives doing things they loved. They remained each other’s support through it all. Their story reminds anyone who knows of it of the resiliency we all have inside us, no matter what life throws at us. Next week, check-in with us for more about the Michales and how Edwin’s dementia re-shaped their lives. You can read Part Two of their story here.