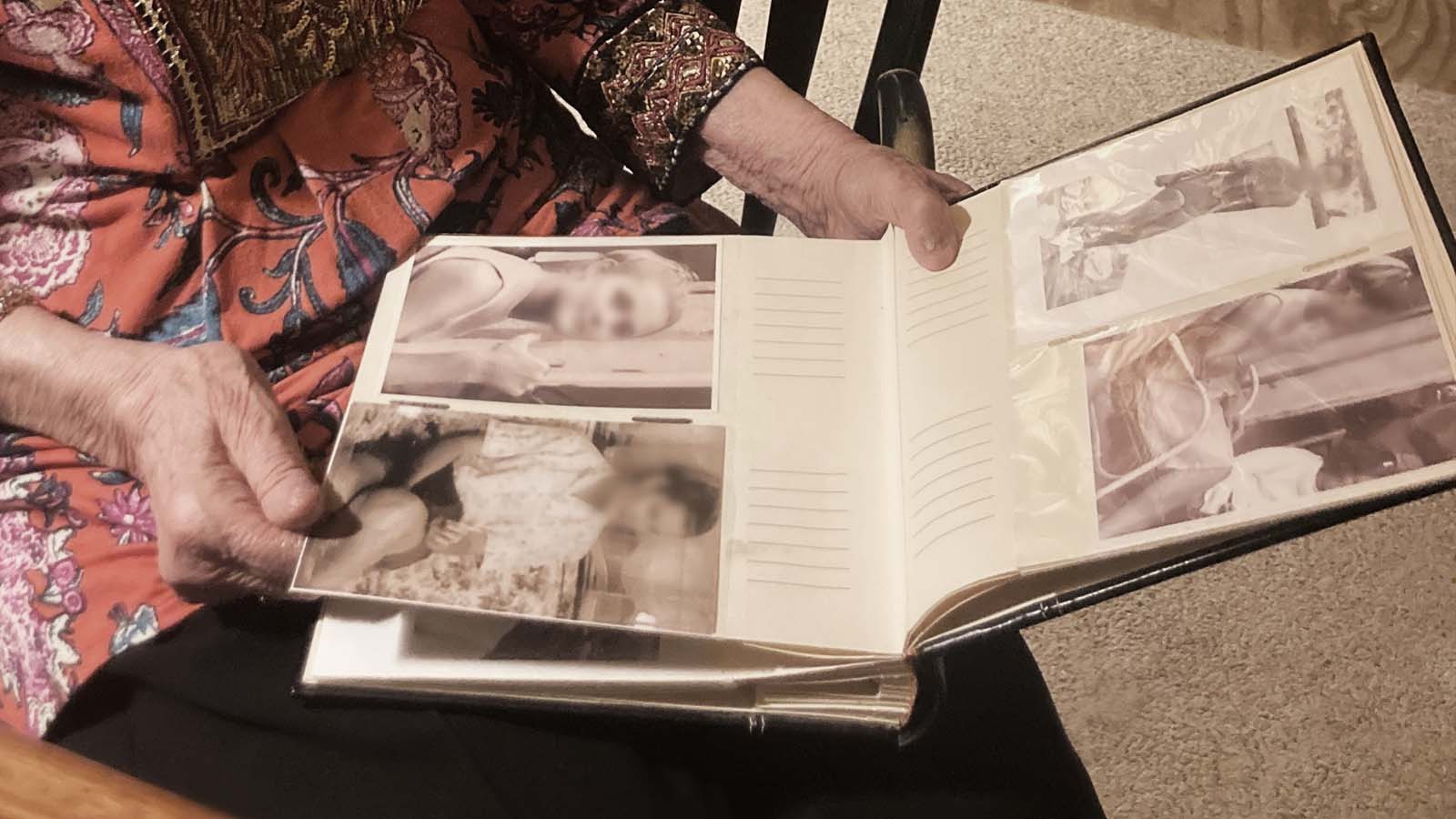 This blog is the third and final installment of the story of Lena and Edwin Michales. You can read about their early lives together here and the progression of Edwin’s dementia here.

Edwin was finally home from the adult behavioral health center. His medication had been adjusted. He was now taking 13 medications total, which Lena managed for him. He seemed to have leveled out. They were looking forward to the rest of the summer. Both had been vaccinated. They had season tickets to the symphony, and because few people were going out due to the pandemic, Lena and Edwin could go out to dinner without it being too stressful or triggering for him.

“We had a pretty good quality of life for where we were.”

Edwin’s dementia was still present in their lives, of course. The couple had six grandchildren they weren’t able to see due to the COVID-19 pandemic, and Edwin would ask Lena about how they were doing over and over again. He wanted to know where they were, if they were all healthy, and what was going on in their lives. Lena would answer him every time. She recalls, “We were very isolated because of the pandemic. So we couldn’t get out and see people, and that’s very difficult for a dementia patient.”

Even so, the couple was thriving as much as possible. Edwin still needed Lena to be near him at all times, but his moods and behavior were less volatile than they’d been. They would still sit on their deck in the evenings and look at the trees Edwin had planted all those years ago. Some days they would eat lunch at the park near their home.

Then, Edwin started complaining of back pain.

Lena took him to see their doctor, who ran some tests, and sent them home, telling them nothing was wrong. When his pain didn’t get any better, Lena took him back. She says they told her that they’d scanned him up and down, done x-rays, and couldn’t see that anything was wrong. They suggested he go to a rehabilitation facility to help him build up his strength. Lena says, “I thought, you know, they can’t find anything, so let’s try this. And he just steadily went downhill.”

Lena knew something wasn’t right, no matter what the doctors were telling her. She was frustrated with the entire situation. Because of COVID, she couldn’t see Edwin, and it seemed as though no one was taking her concerns seriously. It was the Occupational and Physical therapists at the rehab facility that finally listened to her. “I kept saying to them this just isn’t right. Something is wrong.” They agreed with her. They didn’t feel the issue was physical. They took a look at his medical records and discovered that Edwin had never had an MRI done.

“They’d told me that they’d run all the scans, that he’d been tested for everything.”

Lena hung up with the therapists and immediately called the social worker at the rehab to request that they order an MRI. During that call, she found out that Edwin had been on suicide watch for days. He was in so much pain; he was threatening to kill himself. No one had called Lena to let her know. She was furious, but she bit back her anger and told the social worker that she wanted Edwin transported to the ER right then and there. The social worker said that Edwin would have to wait another 5 or 6 hours before transportation was available. Lena did not swallow her anger this time. She told the social worker, “Call 911. If you don’t, I will. I want him in the ER now. Not in five or six hours.” Because Lena had medical power of attorney, Edwin was rushed to the ER. Lena met him there. She was walking down to the room they had him in when she heard Edwin screaming.

Lena had never heard Edwin scream in all their time together. In the ER, they had to use fentanyl to control the pain, and they had to give it to him more than once. Lena spoke with the ER physician and requested that he order an MRI. The physician told Lena that it wasn’t possible; they don’t order MRIs in the ER because insurance companies deem them too expensive. Lena had had enough. She told the doctor, “Maybe it’s damn time you broke the rules!” Whether it was her fury or the pain Edwin was in, the ER doctor ordered the MRI. Then they were able to see it all. And it was too late.

Despite Lena’s pleading with his healthcare team that something was seriously wrong, Edwin had gone a month and a half undiagnosed with an infection that would end his life.

It was an infection he’d caught while he’d been in the hospital or rehab. He’d gotten it from either a blood transfusion, through an IV, or perhaps a catheter. By the time they found it, he had seven abscesses up and down his spine. The infection had spread to his pelvis, his bladder, and his stomach. The infectious disease doctor, his neurologist, and others on Edwin’s healthcare team were called in. For some reason, they decided to speak with Edwin without Lena present.

“I was so angry and very sad.”

They explained to him what it would take to clear up the infection. It would take months of IV antibiotics in a facility. He would not be able to come home, and they would have to get every single abscess. Edwin had a lot of them. He would have to have drains throughout his body. If he survived that, he would have to undergo more surgery to put titanium rods into his spine, fuse, and remove bone because the abscesses had already destroyed the bone. After all of that, he would have a two-year recovery. Because of the infection and his other conditions, the doctors would not say that he would survive any of it. In the end, it didn’t make a difference that they’d discussed any of it without his wife present. When they asked him how he’d like to proceed, he was clear about his wishes.

Lena brought Edwin home. She says, “This is where he wanted to be, right here. I promised. And I kept my promise.” They put a hospital bed in his favorite room – in addition to their home that was reminiscent of a log cabin. He called the room his “cabin in the woods.” The first week he was home, their great-grandchildren came to visit. Lena recalls the oldest, their 14-year-old great-grandson, sat with Edwin and held his hand. He spoke to Edwin and told him how much he loved him. After that, Lena says, “I couldn’t stay. I had to leave the room and let them be there by themselves.”

When asked about how she was feeling throughout all of this, Lena says she didn’t cry, and she didn’t get upset. Even when she lost her legs, she didn’t cry. She did what she had to do, and that’s how she approached things with Edwin. She says crying wouldn’t have solved anything. It wouldn’t have made him better, or moved them forward, or taken care of the house, or the bills, or the grocery shopping. And the whole time he was dying, she didn’t cry. He asked her one day after he’d been home, “Why do you look so serious?” And she told him, “Because I just want to take good care of you.”

After he passed away, Lena had a small service for him. Because of the pandemic, they weren’t able to celebrate his life in a way that they may have envisioned otherwise. Lena had been a teacher her entire life. Immediately after Edwin passed, her past students were some of her biggest supporters. Walking into their home now, you can see the stacks of letters and cards on the bar in their kitchen – all from students she’d taught over the years.

Lena says for a time after he passed away, she was still so angry. At how it all happened, and at Edwin. But one day, shortly after he’d passed, she was going through the drawers and files in his office. And she came across a photo album. It was full of pictures she’d never seen – pictures of her that Edwin had taken throughout their lives. She’d had no idea he’d taken them. Inside the photo album were images of Lena, living her life, while he loved her from behind the camera lens.

Finding the photo album dissipated a lot of the anger Lena had toward Edwin.

Now, months later, Lena is working to find a way back to herself. She was a caregiver for so many years. She says they were lucky – because Edwin was a veteran, they received respite care in the last weeks of Edwin’s life. However, she recognizes how impactful it would have been for her to have a professional caregiver earlier. “The thing that people need to be aware of, and that I wasn’t, is how badly I neglected my own health. My physical health, as well as my emotional health.” She’s started going back to church and says she may become involved in advocacy in the future, but for now, she’s back in physical therapy, “I need to get strong. That’s part of the healing, being able to do that.”

Lena and Edwin’s story is just that – their story. Unfortunately, however, worldwide, spouses are caring for their partners on their own, with very little support. Often, in Lena’s case, the primary caregiver neglects their own needs to their detriment. Asking for help can be difficult, especially with the stigmas surrounding dementia. But support does exist. If you or someone you know is struggling as a primary caregiver for someone they love, reach out to us. We would be honored to help.